I hosted part 2 of my 60th anniversary of 1944 WWII major operations in Europe last weekend. This time it was Operation Market-Garden, the largest failed military offensive involving an airdrop in the history of mankind.

Back in June I hosted a similar event to celebrate Operation Overlord (aka D-Day). It was a great event and a good introduction to war gaming for several folks, but I wanted to change things up a bit this time around. We played a mix of operational and strategic games with tactical games. This included games ranging from Normandy '44 to Combat Commander: Europe scenarios focused on smaller tactical operations.

Market-Garden is most interesting, I believe, because of the scale and audacity of the entire operation. It was so counter to the normal caution exhibited by Field Marshal Bernard Montgomery that even the Germans found it hard to believe it was happening while it was happening. The idea was fairly simple: capture a key highway through the heart of Holland to connect the north-eastern edge of the allied forces that had so recently broken out from Normandy with the northern entry to the Ruhr valley in Germany. While doing this, bisect the key depleted German forces in this region and force an obvious surrender and end of the war by Christmas 1944.

So while there were very interesting local tactical operations along the way, the terrain and overall allied plan is what makes this operation noteworthy in the first place. I wanted games that reflected this scope and would give participants a sense of the allied challenge and why they failed.

Did I mention there were a few German SS divisions hanging around that the allies didn't know were there? 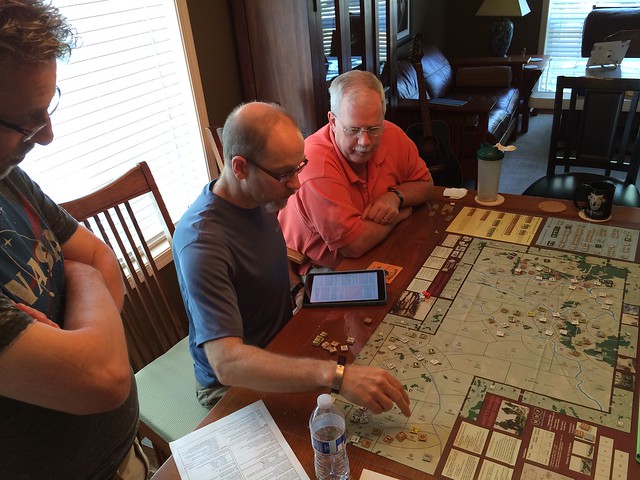 The centerpiece game for the day was Monty's Gamble - Market Garden, an area impulse game released in the 90s that I had never played. Doug and I had chatted about this day quite a bit and I knew this was high on his list of games to present and teach. He came up with the brilliant idea of a team based session that could support anywhere from 3 to 6 players. We ended up having 9 players total that day, with 4 wargame newbies, so we split it into 2 groups. Five would play Monty's Gamble and four would play the Memoir '44 historical map and scenario for Market Garden from the expansion Tigers in the Snow.

We used the setup and map for Monty's Gamble to introduce the operation and its strategic challenges (and surprises) for all of the players. That was probably my favorite part of the day - having Doug explain the initial context for the operation to everyone there, with a few of us chiming in from time to time adding additional factoids (see, the "Replacements" episode of Band of Brothers too place primarily here by Eindhoven, etc.). Maybe his just wasn't necessary for Overlord given how familiar even non-military junkies are with Normandy, but it sure was a nice touch for Market Garden. 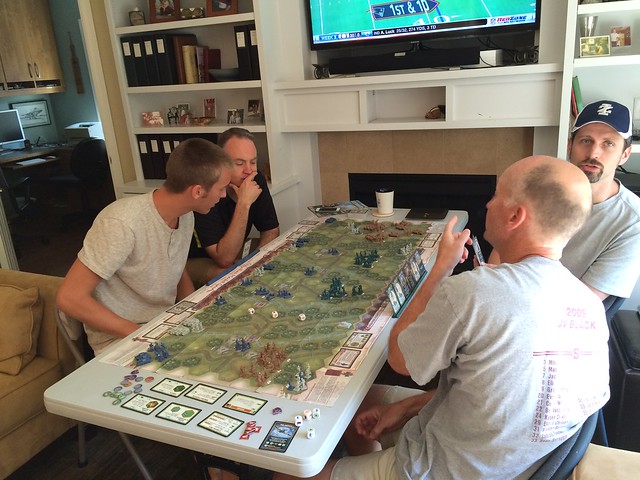 The others played the Memoir '44 scenario and it lasted a solid 3-4 hours. I think this might be a hidden gem in the inventory of M44 scenarios. It is hard to find and one of the only large historical maps (I.e., you don't need to use the terrain tiles to construct the map - it is printed to match the historical map for the entire operation). I borrowed this from Eric and will be keeping it for a while unless he demands it back sooner as I want a chance to play it myself with Matthew.

While I'm sure I distracted my teammate with my many departures to take care of grilling burgers and answering rules questions for M44, I think it was a good day for all involved.

In December we will conclude allied operations with a day of Bulge operations. There are so many good games to choose from.