KC came over for a great day of gaming - 3 player Napoleonic Wars with Jacob followed by two games of A Game of Thrones Living Card Game. A while back (4-5 years ago) I played the original collectible card game but eventually traded it away. That was a mistake and I'm having to pay my way back into the game. 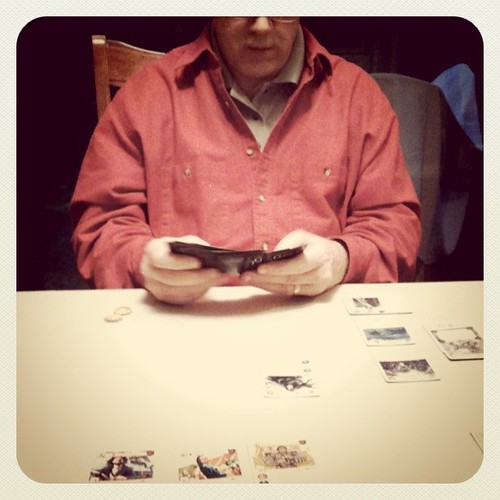 The living card game model is more alike the collectible format than different, but I do like the predictability of the expansion packs. For now I only have the core set and KC and I played to games: Baratheon vs Lannister and Stark vs Targaryen. I got smoked both times - neither game was close. While I'd like to think the decks were unbalanced in some way, I think KC may have had great opening draws in both games and he certainly picked up the core mechanics quickly. In both games he played cards that give discounts to future plays of cards in the first 3-4 turns giving him a significant speed advantage. I just couldn't keep up.

One concern I have is that it seems hard to come from behind even with good card draws. Way too early to judge this. This is a game that is supposed to shine with 3-4 players and I hope to try tomorrow with Jacob and Matthew. By the way, boxes of CCG booster packs are very cheap so I ordered a few to give some deck building options. I'll report back and let you know how that goes.