My good friend Brian emailed me about a month ago asking about Dungeons and Dragons. His son John started expressing interest in learning the game and Brian wanted some tips and suggestions. Brian had played only once during college 20-25 years ago, and while 4E D&D is relatively easy to learn I think it can be a tough game to bootstrap without a dedicated teacher. I proposed that they come out to Sherwood to join us in a game of Descent. Not quite D&D but a great opportunity to get a feel for this style of game. I also felt this was a game they could pick up on their own and play with 1 or 2 of John's friends. 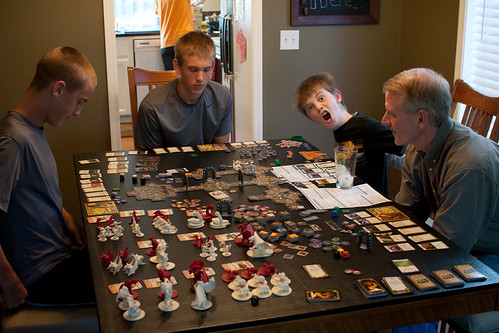 Jacob and Matthew joined us, and we played the intro scenario for what seems like the fourth or fifth time. In fact, I'm not sure if I've ever played anything but the first scenario. This is a cakewalk for the heroes but Jacob still managed to die twice, adding some fun to the session. John absolutely loved the concept of adding skills to his character, even going back to town to spend 1,000 coins on a new skill card. This is a good sign he'll be a big fan of deeper RPGs.