While I haven't had much time for gaming lately, the time I have made has been very good. Some meaty games and old gems that don't hit the table very often.

A few weeks ago the boys and I broke out Attack! with the expansion. Besides Nexus Ops (which we play when we want something shorter), Attack! is probably our favorite Ameritrash multi-player conflict game. It has a nice steady build-up, enough resource management to keep it strategic, and a fun but bizarre alternative-history view of WWII. The game must be played with the expansion in our opinion, and we may consider getting the the Attack deluxe expansion at some point.

In the good old days, Jacob and Matthew would go at each other's throats while I sat back and cleaned up the scraps. No more - the boys made a secret alliance against me and knocked me out early. Jacob held off Matthew for the victory. I think the game took about 2-3 hours total.

While Jacob was away at Philmont, Matthew and I were digging for something a bit deeper to play. Matthew has stayed away from wargames heavier than Memoir '44, but given his affinity for Lord of the Rings I thought War of the Ring might be a good next step for him. This is a game I absolutely adore but play too infrequently to quickly start, though this time around the rules came back to me more quickly and I'm starting to see the simplicity of the system. Matthew played the Shadow and I the fellowship. 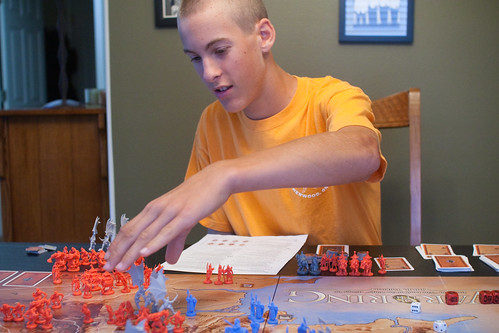 Matthew was slow going on the military side, taking too long to siege Minas Tirith and get the Shadow armies rolling north. Still, I played fast and loose with the Fellowship, spinning off companions early and running as quickly as possible to Mordor. I pushed things a bit too hard (relative to Matthew's military buildup) and found myself in Mordor with a tad too much corruption to handle. I had to slow down a bit in hopes of getting some cards to help me heal corruption, but the rules force you to slog ahead even if slowly. In the end it came down to the last two tile draws - Matthew managed to draw the only tile in the bag that did not advance the fellowship just as I was sitting on the doorstep of destroying the ring, then on the next tile draw I had only a 1/3 change of surviving and alas I didn't. Score one for Sauron. Matthew loved it and hopefully we'll try again soon.

Last weekend Ken and Eric came over to join Jacob and me in a long overdue game of Roads and Boats. We used one of Sterling Babcock's fine scenarios that allowed the players to get rolling with minimal interaction, but forced some competition at mid-game for the mining resources in the middle. 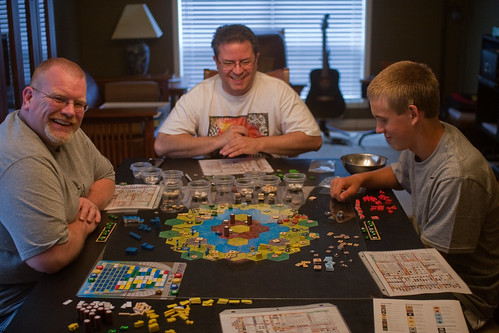 Jacob is a natural at this game and spanked us all pretty badly. Eric and I both made poor decisions on our mining upgrades which kept us even further back. I quick-played the endgame by building out the wonder but that netted me a solid 4th place. It didn't help that my deep mine yielded three consecutive ore tiles - even one gold would have gained me 3rd place, and three gold 2nd. As I told the group, I love this game even when I finish last. Jacob, Matthew, and I plan to play a three player game this coming Sunday.