Snuck in some boardgaming over the past week, including a much anticipated first play of Days of Wonder's new release Small World (not to be confused with It's a Small World). This is a re-theming and streamlining of the light-weight civ game Vinci, a steady favorite in the Brooks household. I hosted our gaming group on Tuesday night and we had a full house of five players.

Unsurprisingly, the components are well produced, colorful, and evocative of the theme of a various races of fantasy creatures competing for viability in a small world. I'm not sure how much the rules are streamlined over Vinci as that game was straightforward to begin with, and some of the special racial powers in Small World seem to me more confusing than the predecessor. 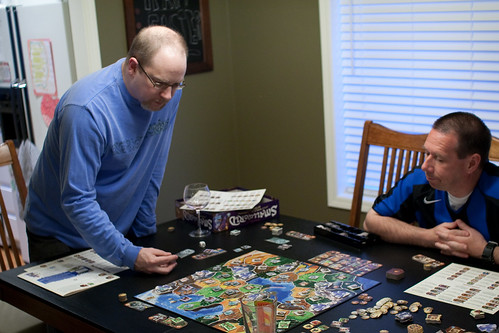 The color and theming of the bits is troublesome, however. Aaron Lawn wrote a nice piece on usability of this game, and it reminded me of an article I wrote several years ago on our group blog about the usability of Antike. With five players there's simply no easy way to keep track of who is what race on the board, and this problem gets worse as races go into decline (tiles flipped to a grey-ish color). It didn't help that most of us were stepping out of the room between turns to watch game 5 of the Blazers-Rockets playoff game. 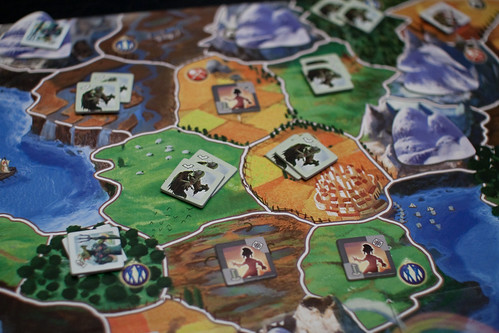 Still, I found myself thankful that I held on to Vinci with its simple colored bits for each player, to which you attach a couple of civ markers to keep everything straight. It isn't as pretty, but it just works. In multi-player games were choosing which player to fight is an important decision, it shouldn't require levels of indirection to figure out who is who.

All that said, I'm happy Small World exists and that a new crop of gamers can discover this fantastic system. Perhaps if you stick to 2-3 players my concerns get mitigated significantly and I hope to get a chance to try it again with fewer players. 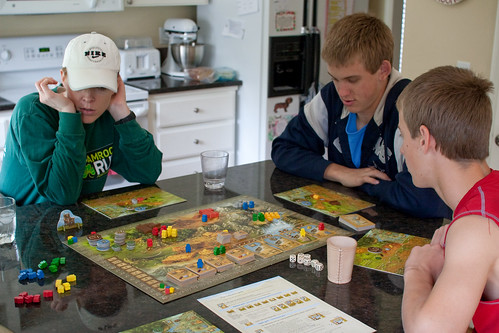 Stormy weather hit the greater Portland area yesterday and everybody was up for some boardgaming. My copy of Stone Age has been sitting on the shelf unplayed for about a year (I think my only other play was with KC's copy). This is a fantastic game - easier to teach I think than its worker-placement competitors (Caylus, Pillars of the Earth, Agricola, Cuba) but with substantial depth. The dice add a nice fun factor to the game and I really like the different paths to victory points. 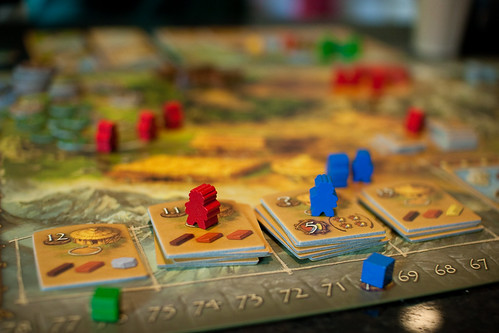 Jacob spent the game in the lead while I accumulated a healthy stash of cards to give end-game bonuses. Julie sandbagged the whole game about how badly she was going to do, but she boomeranged passed Jacob and almost caught me at the end. I think I finished at about 128 points, Julie at 118 or so.