Gaming continues to be frequent and fun. Last weekend the boys and I tried Winds of Plunder for the first time, the GMT game stuck on my burndown list. It was only OK, and Matthew commented once that he likes Piratenbucht more. I'm not sure I agree, but there's certainly enough chaos in the game to make me feel that it should be lighter, more fun than it is. It is not a very strategic game - control can be difficult and if you fall behind in arms then it is likely game over with 4 or 5 players. I'm not sure if this will get played again so it may move to my trade pile.

On Sunday afternoon Mike, Matt, and Ken joined me for my third playing of Brass. Brass is still shiny for me and I think it will become a staple, especially if we can get the play time down to about 2 hours consistently. This group was a bit more... contemplative than others I've played with, and it took about 3 hours to get through the game. They all played well and used a variety of strategies. Ken opted to develop early on and focus on getting level 2 buildings on the board during the canal period. I think there's something to this strategy, but I think it is tough to do first thing and probably makes more sense after you are generating some income with a flipped cotton mill. 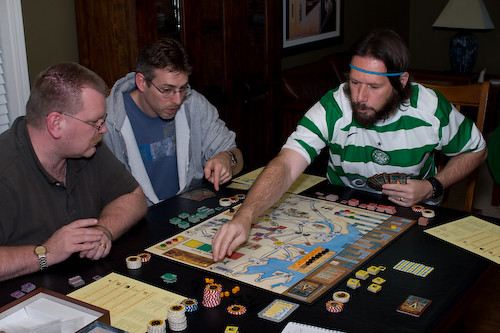 I was in last place at the end of the canal period but managed to get a strong income engine running and won with 122 points. Matt was in second at 116, Ken and Mike tied at 106. Everyone enjoyed the game and it may come out again today at Doug's gaming session.

Also on Sunday evening I finally played Niagara. We actually had more fun than the picture below would indicate. Julie and Matthew spanked me - I think I ended up with only 3 gems. The board and disks gave us fits, and I'm glad I opted to not do this game for the elementary school games class - I think there's too much potential for mishandling the parts and frustrating other players. I'm not sure this is a game I'll want to bring out often, but it is a nice novelty to keep around. 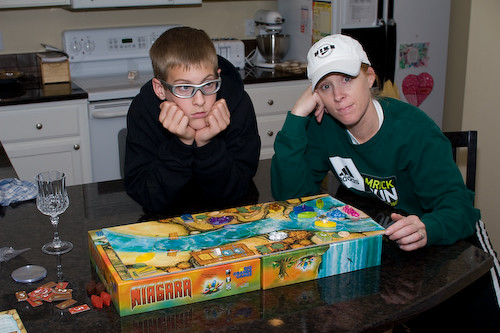 Friday was an in-service day for the boys' schools and I convinced Jacob to play 1960: the Making of the President. This is the lighter, shorter cousin to Twilight Struggle and it has solid mechanics and plenty of tough choices to keep it engaging. 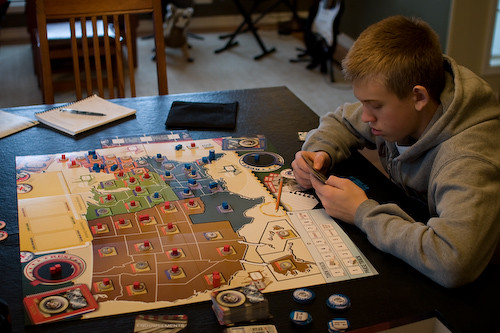 That said, the tension that we always found while playing Twilight Struggle doesn't appear in this game. I think there are a few reasons for this: 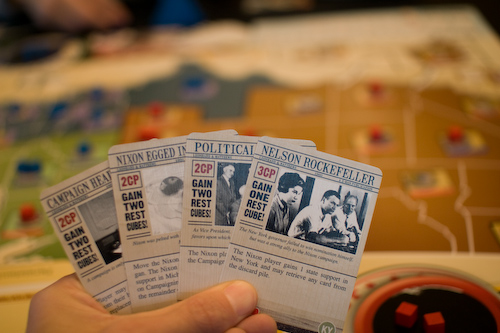 The game took 2 hours 20 minutes, probably too long for this game. We'll keep trying it and see if we get a more intuitive feel for the scoring and hence see an increase in tension. For now, though, I think I'd rather bring out Twilight Struggle for a lighter 2p strategy game.