After too little sleep, Jacob and I swung over to the "other side" to play a roleplaying game starting at 9am on Saturday. The game: Spirit of the Century, the adventure: Aces Harrington vs. the Snow Monster. Paul Tevis has talked up this RPG and it has been on my maybe-buy list for a while, and I was frankly surprised to see it show up on the GameStorm agenda. I had a lot of fun, Jacob less so - I think it speaks to the audience for the game and its reliance upon player creativity and maturity. 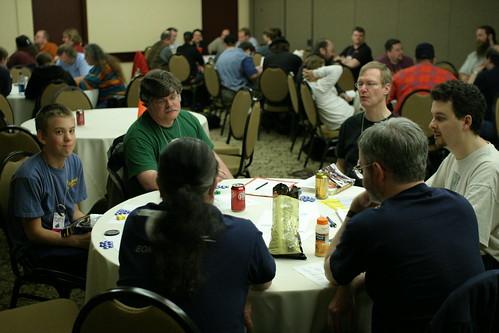 Spirit of the Century uses the fudge system for resolution, a system I was familiar with but had never played. Fudge uses six-sided dice with two minuses, two blanks, and two plusses. You roll four dice, sum the dice, then add to the base ability (generally zero to seven). The game setting is pulp in the 20s/30s (think Indiana Jones), and I played an Inuit Hero from Canada. The six adventurers were snowed in at a lodge in Canada and squared off against New York mobsters and a German mad scientist working on mind control for grizzly bears.

Back to my comment on player creativity and maturity: this system relies on collaborative story telling where players can alter or contribute to the story line by bringing forward aspects of their character using fate points. Two of the aspects for my character included "respect for authority" and "lover of nature". At various plot or action points in the narrative, it behooves the players to invoke these aspects to try and alter the tide of events. The challenge is (in a well-run game, in my opinion) that the player needs to creatively introduce this aspect as part of the narrative. For example, I wouldn't say "I'm a lover of nature so I'll use a fate point to reroll my attempt to release the bears". Instead, I might say "I'm furious that the scientist has violated the order of nature with these dastardly mine control devices! I must scare this bear away so that he flees the scene, so I rely on my hard-earned knowledge of grizzly bear intimidation forms to frighten him." Jacob had a hard time getting into the rhthym of this game - his experience (and preference, I think) is the D&D style of tactical problem solving and combat. These are both different forms of roleplaying - Jacob does get into his character when playing D&D. It's just that the emphasis on narrative in Spirit made it difficult for him to enjoy the game. That's OK - he'll likely get there at some point. I know I had a blast.

The rest of the afternoon was spent playing Knizia games and running the Kniziathon. Like I said, more on that in another post.

Saturday night was a marathon, semi-engaged game of Arkham Horror. There were two big sessions going on, and I'm glad (for a number of reasons, mostly the company) that I ended up with Doug's group. 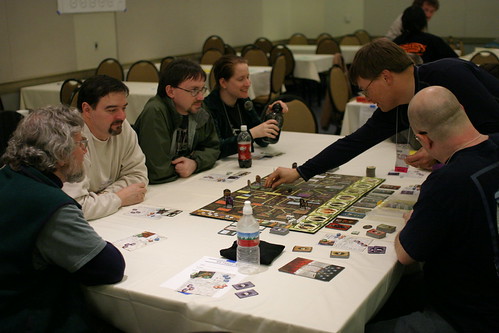 Still, this was a huge group (8 players) with plenty of down-time. OK given that I had some other errands to run while playing, but it definitely pushed the game later into the evening and under normal circumstances I would prefer 4-5 players.

The game is fun, and reminds me of a mix between the board-RPG games from Fantasy Flight (like Doom and Descent) and Betrayal at House on the Hill. I think it was too late and we were all too green to collaborate like we should have, and I suspect that's where the game really shines. I know most of the time I was just doing my own thing, and doing it rather poorly at that. The base mechanics are easy to understand, though I suspect the learning curve would be steep if you learned the game from the box. The game wasn't great enough for me to consider running out and purchasing it, but I definitely want to try another game with fewer players. Would be nice to swing a trade for this for my copy of Doom.