Last Saturday I hosted a dynamic duo of class big games - Roads & Boats and Die Macher (new edition). Eric, Wes, and Michael joined me for a morning start of R&B.

We were all thankful that Eric managed to make it (late entry) - the rest of us were newbies. We played the rowing scenario, encouraged for 1st time four-player games. 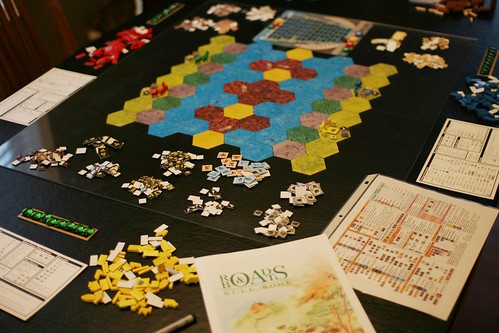 The game isn't very complex, especially if you are somewhat familiar with the "gather these to build these" civ mechanic. By playing the rowing scenario, we were pretty much guaranteed to have 2 separate games going on - Michael and I never directly met up with Eric and Wes with the mountain range between us. Both sides mostly cooperated throughout the game, even negotiating the construction of certain shared resources (like the rowboat factory). 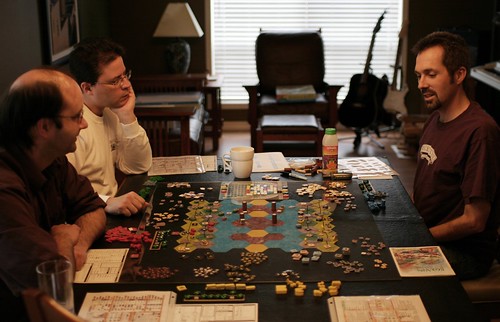 While I did a great job creating an efficient transportation network, I did a lousy job of converting my resources into coins and stock certificates (that's how you score points). I essentially lost track of how to score points and how much time was left in the game. The others didn't, and I finished a solid last place. Eric won easily, but we all agreed it was a great gaming experience. I found it much more enjoying than Antiquity.

The evening (approximately 6pm) meant a double header of Die Macher with 8 players total participating. Doug brought along his copy, and for a much better description of his session you should read his report on Die Macher. 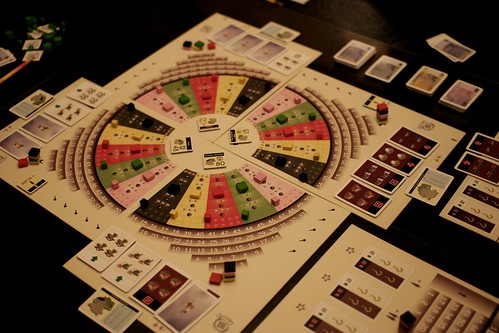 I felt a bit bad about Brandon and Jacob playing - Brandon had spent all day at a Lego Robotics tournament, and Jacob spent all day down at the Evergreen Aviation Museum earning his aviation merit badge. They were both a bit zonked so we adjusted to a 5-round game instead of the typical 7 round. 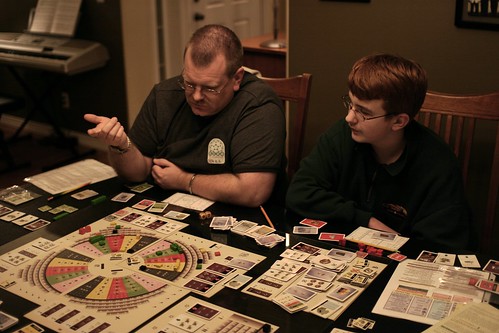 This is a game I'll have to play again - there are a lot of moving parts and I did enjoy it quite a bit. The human factors issues bothered me a LOT (again, read Doug's report on details) and I will likely do some markings on my own game cards if Valley Games doesn't do anything to correct them. 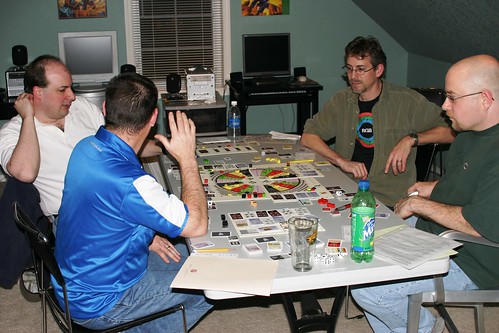