Last Saturday was a very meaningful day for me and a number of my closest friends. You see, HAVOC: The Hundred Years War from Sunriver Games made the final turn from concept into reality as we completed assembly of the first 400+ copies of the game. Julie, the boys, and I head for Frankfurt tomorrow for about a week of touring and another week of Essen Spiel. We couldn't have cut things much more closely.

For the past two weeks Julie has been hard at work assembly our boxes, which were produced by LithoFlex aka The Box Co-op. These guys aren't really in the business of producing game boxes, but we were impressed by their quality and wanted a box that was something like the Great Dalmuti box that you may remember. One challenge was the insert that holds the cards in three separate sections in the box - the little dividers don't like to stay folded tightly, causing the insert to bridge out of the box a bit. Julie solved the problem with a little bit of glue on the inside of the insert. Here you can see Julie removing the clothes pins from the inserts after a round of drying 60 of the inserts. 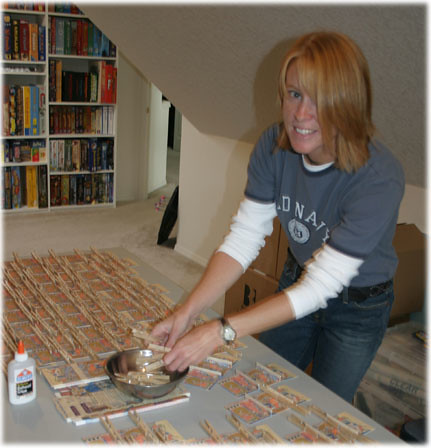 Julie managed to get over 600 of the boxes prepared before the cards or rules arrived, putting us in good shape for an assembly party that we held on Saturday. KC, Rita, and Jenna arrived early afternoon on Saturday to get started while Julie and I watched Jacob's afternoon football game. By around 3:30pm we were in full production swing, with Jenna and Julie assembling the boxes with the three decks of cards (from Carta Mundi USA), the scoring token insert, and the rules. 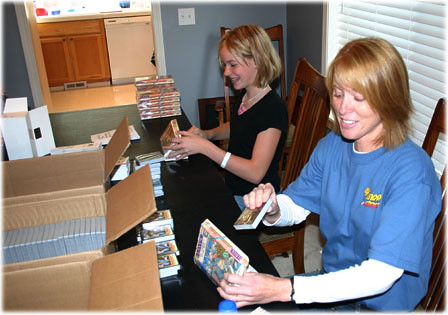 After a bit, our "friends of Sunriver Games" started arriving. Mike and Matthew helped out with assembly while Jenna took over the sorting of our cool bonus cards (more on that later). 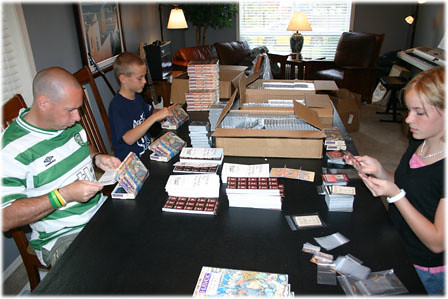 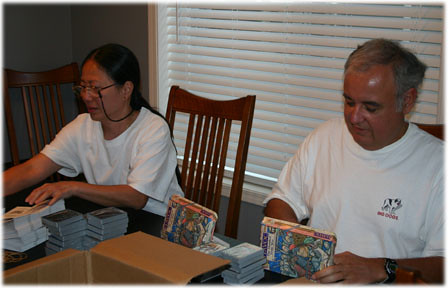 Ken Rude showed exceptional mastery of the impulse sealer, which we used to seal the 6"x11" shrink wrap bags. We purchased the shrink wrap equipment from Plastic Bags for You - they had a great deal on a starter set that included enough bags of the right size for us to do around 500 copies. This package originally showed up on my doorstep a week ahead of time, but the impulse sealer didn't work (no heat!) and I had to convince them to send me a replacement ASAP without returning the defective unit. They had GREAT customer service and got the unit out that Monday; unfortunately train delayed the UPS shipment and it didn't arrive until 4:55pm on Friday. The cards arrived the Wednesday before that, the rules on Friday morning. Talk about just-in-time delivery… 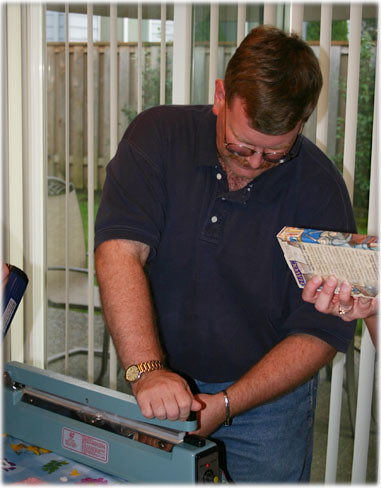 After sealing the bags, I was the master of the heat gun (and I've got the second degree burn on my under-arm to prove it) and applied the final touches to shrink wrap the boxes. Jacob and Jenna were my two main "feeders" throughout the day. 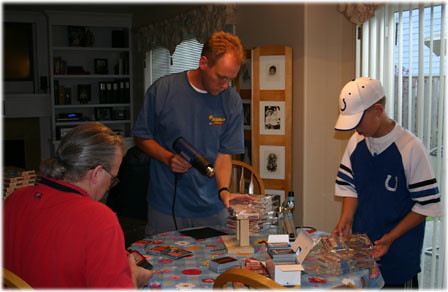 At 3:34pm on Saturday, we finished our 1st box of Havoc, which of course went to designer KC. 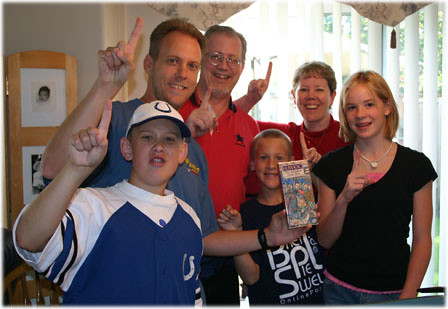 At about 7pm we stopped production for the night, with our original batch of 440 games boxed and about 100 left to shrink-wrap (shrink is the bottleneck). It was of course time for a celebratory toast… 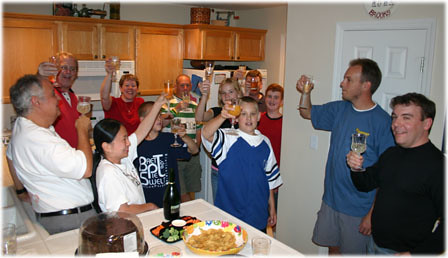 And a team photo in our t-shirts. 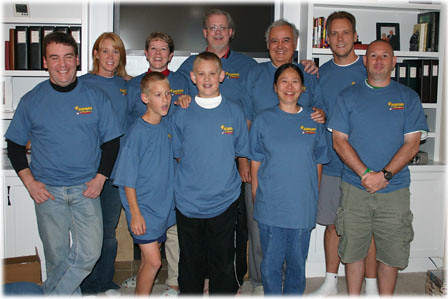 Here's the final product. We are very proud of the game - the production values surpassed our expectations and we hope other gamers agree that this is a first-rate production. It plays pretty well too. 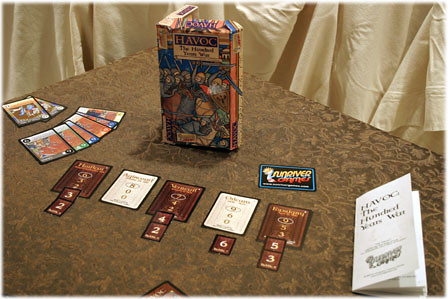 So what's the deal with the extra cards? We are offering a mini-expansion with all purchases made at Essen! This expansion adds a nice little twist to the game, making it a bit more chaotic but in a fun way.

Make sure you follow my posts over at the Gathering of Engineers site - I'll be doing a detailed financial analysis of the game in a few weeks.