Saturday was our one day off and a chance to see some interesting sites in Israel. Jerusalem was on the top of my list, plus I contacted Yehuda Berlinger of the Jerusalem Strategy Gaming Club and arranged for a face-to-face visit. Our morning started with a 9am departure from Tel Aviv to make the 45-60 minute drive to Jerusalem. We found a nice place to stop for some pastries and coffee along the way (not sure where we were, but there was an IDF military museum with a tank static display right near the store).

We drove straight to the Old City and parked near the Zion Gate (no particular reason - the parking was just easier there). Jerusalem is striking as you enter it, even the newer portions. The city planners work hard to keep the old city look and feel, and many of the buildings have a tan stone facade. Erich and I opted to go it alone without a tour guide, or rather, Erich volunteered to be my tour guide as he had visited about 2 months prior.

Our first stop was the Christian quarter and the Church of the Holy Sepulcher. There was quite a bit of activity here, clearly across a wide range of Christian denominations. 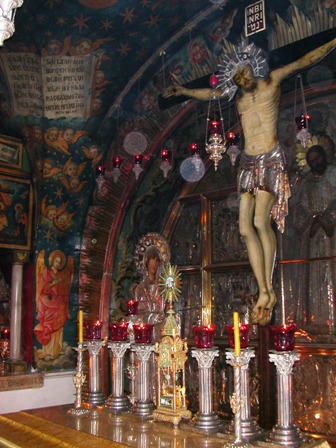 The Greek Orthodox chapel in the Church.

It would have been beneficial to have a guide or at least a detailed guidebook, as I probably missed a number of the more revered locations in the church. 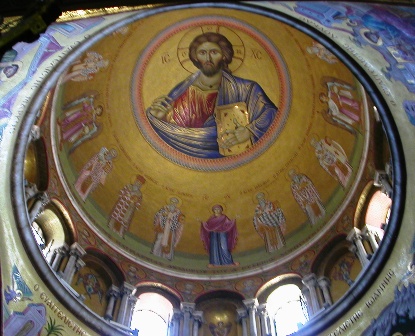 The dome within the Church.

The most interesting parts of the Old City (to me) were the plethora of markets and shops, mostly Arab, featuring touristy goods and some very decent food. I picked up a nice silver necklace for Julie and Erich and I sat down for a rest and some lunch (humus, falafel, pita, etc.). 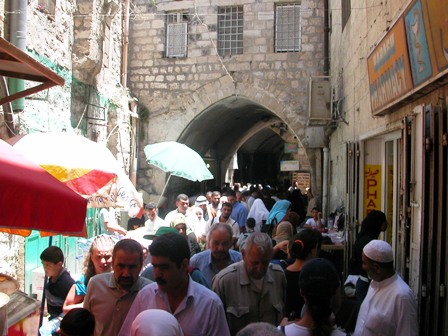 A market within the Arab quarter.

Erich and I both wanted to visit the Dome of the Rock, but unfortunately that wasn't an option on Saturday. We did visit the Wailing Wall, but took no photos as it was still Shabbat. 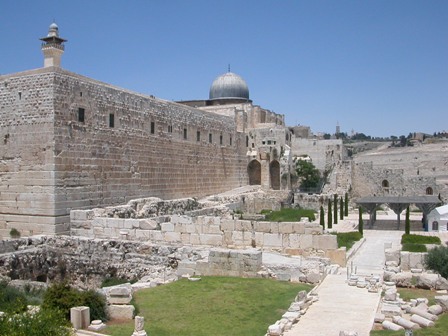 Some ruins in the Old City just beyond the Wailing Wall.

At around 1pm, Erich and left the Old City for our car and ventured up to the Mount of Olives, famous for its wonderful view of the city. At the base of the Mount of Olives is the Garden of Gethsemane. The views were spectacular from there, affording us our best view so far of the Dome of the Rock. 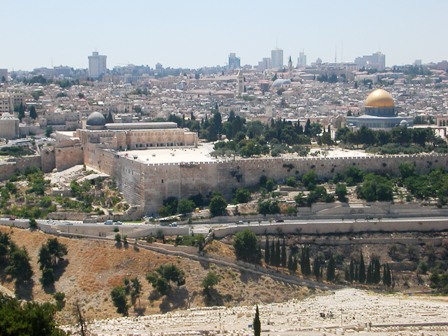 The view from the Mount of Olves. You can see the ruins pictured in the above photo in the middle left of this shot. You can also see the Jewish cemetery at the bottom of the photo 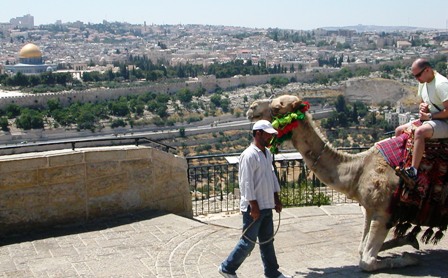 Erich was keen to ride what is probably the only camel in Jerusalem. He didn't actually ride it - he just paid to get on it, stand up, then sit back down.

Next it was time to try and navigate our way to Yehuda's home. Our drive away from the Mount of Olives took us to an interesting surprise in East Jerusalem: 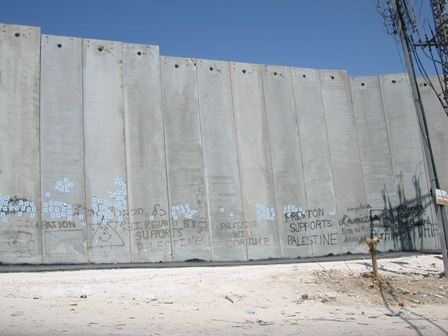 The security wall being built to encompass East Jerusalem.

There were quite a few (10-15) IDF soldiers patrolling this end of the wall.

Yehuda gave us some fine directions from Tel Aviv, but that's not where we were coming from and Jerusalem is, shall we say, a bit difficult to get around. Erich has a fine memory though and remembered some street signs to a common landmark from Yehuda's directions, and we were able to find our way there right on time for our 3pm arrival.

3pm on Saturday is still right smack in the middle of Shabbat for Yehuda, and we had discussed ahead of time what this specifically meant for his family. We decided to take a short stroll to see the area surrounding his neighborhood, and he took us to a beautiful park overlooking most of Jerusalem. We returned from our walk and jumped right into some gaming (you can also read his session report). First up was a playtest of Yehuda's prototype cardgame. This is a fine little game themed on learning eletricity safety (sounds right out of KC's playbook!) that involves collecting a set of numbered cards, where cards are generally purchased in auctions. I've simplified it a bit but don't want to give too much away. The theme needs some work but the mechanics are solid and Yehuda should continue to develop this one.

Michael and his son Elijah arrived and we decided on El Grande. This is a game I love but get to play way too infrequently; in fact, this was only my third play. Erich, new to these types of boardgames, was a quick study and was in contention for the entire game. Yehuda made a huge comeback in the second scoring round, going for a wide range of second- and third-place showings rather than concentrating on controlling provinces. This was in contrast to Erich's strategy: focus on controlling 2-3 valuable provinces at any cost. Between the last two scoring rounds, Erich (I think - it might have been Michael) bought the card that scores first place across all the provinces. This helped Erich the most, helped me a bit, but crushed Yehuda as he was not in first in any of the provinces. This turned out to be the difference in the game, allowing me to eke out the victory with Erich a fairly close second. Erich loved the game and asked where he could purchase it back in Portland... perhaps another closet gamer drawn out?

Next up was a splendid dinner with Yehuda and his family. Their hospitality was unsurpassed and it made our journey feel like we were visiting old friends down the street.

Last up was a four-player game of Puerto Rico with Yehuda, his wife Rachel, and friend Nadine (Erich sat this one out to learn). I didn't know what I was getting myself into - these folks are sharks! They've clearly played this game enough to know a wide range of strategies, something I clearly have not done (nor do I ever expect to). Yehuda (aka Jon) won a fairly close game. He was kind enough to leave my score off of his session report. 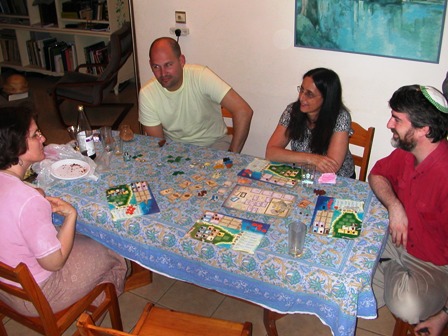 All in all, our visit was a great day of site seeing and friendship. We returned to Hasharon in Herzliya that evening around 11pm we quite a bit of work to do in prep for the next day, but it was worth it and I'm glad we took the time to visit Jerusalem.