My gaming activity has been less frequent the past few weeks, but still very rewarding as I've had a chance to replay a few favorites. Two weeks ago after returning from Salishan, Mike, Julie, and I brought out Tongiaki for a quick play before retiring. As you can see from the photo below, this was a very odd playing as every island was connected directly to every other island. In fact, the first 9 tiles drawn were islands! This had the effect of quick dissemination of islanders with no losses due to sea travel. Julie was very tired and got punchy halfway through the game. She also forgot the important distinction that you don't need a majority on an island to score it - just a presence. 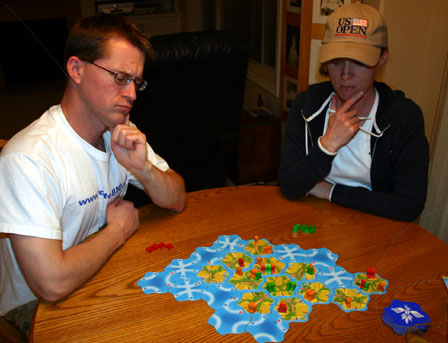 The game played quickly and everyone enjoyed it - I think I won.

No picture for this one, but we played Tichu two Fridays ago, and Ticket to Ride: Europe last Friday. TTR:Europe continues to impress me and will likely be a purchase in the near future. I think it is much more competitive, strategic, and just plain fun - plus, you get to learn some European geography. We played with five this week and I pulled out the win, largely due to completing the 8-train tunnel from Stockholm to Petrograd.

On Saturday afternoon and early evening, Jacob and I joined KC and Rita for some publishing discussion and gaming. KC recently received an eBay shipment of games so we decided to try one of them: Galopp Royal. This is a Klaus Teuber design about royalty being hauled around a royal garden in a sedan chair race. There are some similarities to another game I'm about to discuss, mainly that there are two parts to the game: configuring the racers with cards and the race itself. Cards are gained through what is effectively a blind auction, though there is successively more information available as the auctions proceed. Each player begins a race with four cards on a mat with slots numbered 1-4. On a player's turn, he rolls a d4 to determine which card to use for that turn. Most cards move a player forward a number of spaces, but there are a few that send a player backward. One of the most powerful cards moves a player forward 2 and allows that player to move another player back 2 spaces (or 2 players back 1 space each). We initially had the rules wrong, thinking that once a card was used if was out of the race. We quickly resolved this inaccuracy and found the game to be light and fun, if not very strategic. The auctions are just a bit too random to merit much thought. It was fun to take a chance on bidding up the auction when I was holding a -2 card though. 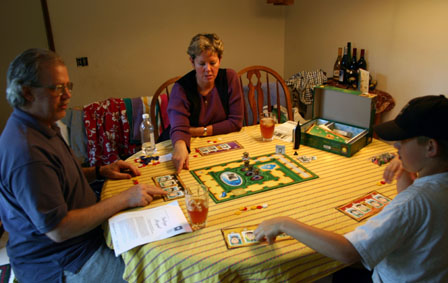 KC, Rita, and Jacob galop their royal sedans around the garden.

Next I suggested we play the partnership variant of Einfach Genial. Rita was new to the game but quickly caught on as my partner. I decided to play a more aggressive blocking game, trying to shut down scoring opportunities for KC and Jacob on their worst colors while still trying to capitalize on big scoring opportunities. It looked like we were going to run away with the victory, but they made a late comeback that turned it into a 1 point victory for us. Rita and I were both out of our weakest color for the last three turns but neither one of us was willing to swap out our hands and give up a turn. 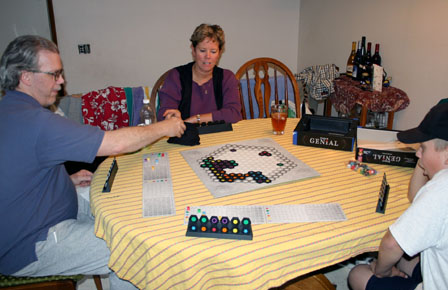 KC and Jacob take on Rita and me in partnership Einfach Genial.

The boys and I decided to try a game KC picked up and loaned us: Alan Moon's Pony Express. On the surface this appeared to be a very light racing game, but there was a bit of complexity under the cover. The odds making is a bit over Matthew's head and I would suggest playing with kids at least 10-12. 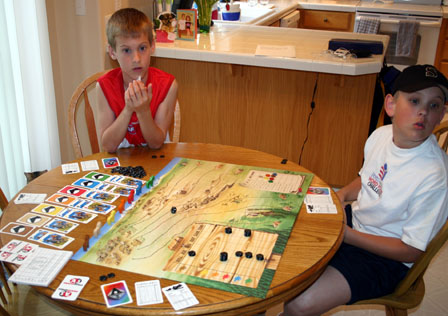 Similar to Galopp Royal, the game is played in two distinct phases: betting and card distribution followed by the race itself (though in Galopp there are 6 different races). There are some interesting market mathematics underneath this game that are worth exploring a bit more. The basic idea is this: each player is dealt a hand of cards that are colored and numbered from 1 to 9. Higher numbers are better, and represent a percentage likelihood that a pony can "press its luck" on a given turn (i.e., a 9 means a roll of 9 or lower on a d10 will be successful). Before the race, players take turns placing a bet (each player starts with 15 chips, and places bets in 5-4-3-2-1 amounts) on one of the horses then playing a card on a horse. The odds for that horse go up or down depending on the spread between the card just played and the most recent card played on that horse. The exact amount of change is determined by looking at a helper card with an odds change table on it. For example, if a 5 was already on the brown horse, and I played a 9 on that horse, the spread of +4 would cause the odds to improve on that horse by two slots. Intuitively this makes sense as the better cards that are placed on the horse, the better the odds it will win. After all cards have been played, the player with the highest bet on a horse becomes its backer and takes control of the horse and its six race cards. The race is straightforward - a horse can always move a single slot on a turn, and if a card is played that matches the color of its current spot it moves an extra. A player can choose to push the pony and roll a d10; a number less than or equal to the card played allows the horse to advance an extra space. If successful, the player can push the pony one more time. If either roll fails, the horse moves zero space for that turn.

After the race is over, the backers of the win/place/show horses win some money. In addition, payouts from the bets are made based on the odds table. In our case, the bets didn't really matter as the final scores exactly lined up with the backer placement: Jacob, Matthew, then me. I can see how this game would be much more interesting with 4-5 players where there would likely be a wider spread of betting (i.e., shared backing of ponies). Overall a fun game; not great but decent with very nice bits.