These past two weeks have been rather odd for me. First, I usually take around 10 days of vacation around Christmas and New Years. In fact, I can't remember the last time I worked the week in between Christmas and New Years. Because we did the cruise earlier in the month, I decided to work three days both weeks. This included today, which is my birthday (I'm 0x25 this year). Second, Julie and the boys have been camped out at Salishan for over a week, so I've had to take care of myself at home which is a frightening prospect. Fortunately I've managed to avoid cooking and any serious home maintenance, though I did do a bit of shower repair this afternoon.

Yesterday Mike Deans held his second annual “first Monday after Christmas game day”. I worked a little more than a half day and arrived at Mike's around 1:30pm. Chuck, Dave, Doug, and Mike were getting ready to begin a game of Air Baron, the Avalon Hill game of airline travel control. I hadn't heard of the game before but decided to jump in and take the fifth seat. 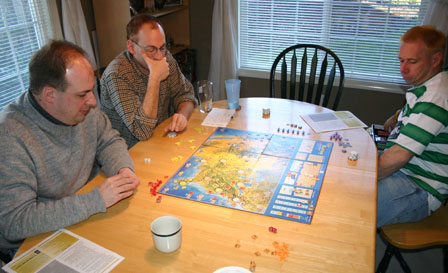 Chuck, Dave, and Mike contemplate their next moves in Air Baron.

This game has a very euro feel to it for a 90s Avalon Hill game, though there certainly is a decent amount of luck. The basic idea of the game is that players purchase control of routes from airline hubs (places I'm all too familiar with such as ORD, DIA, DFW, LAX, etc.) to cities served by the hubs. Some hubs are very valuable (like ORD), while others are less so. As routes are purchased by players, chits for those routes are thrown in the “hopper” along with chits for the hubs and a few other random event chits. At the start of each player's turn, two chits are drawn. If a route is drawn, that player gets a payoff equal to the original cost of the route. If a hub is drawn, all players controlling routes into that hub get a payoff. If a player controls a hub by having a majority of the routes into a hub (or even better, controlling all routes into a hub), then the payoff is even greater. There are a few other mechanics to the game, but that's the basic idea.

Player interaction comes into play as players attempt to takeover unclaimed routes or those owned by others. Takeovers are the only way players can acquire more than one route in a given turn and they become quite frequent after the initial route-grab phase of the game completes. The goal of the game is to achieve a certain level of market share, which is determined by hubs that are controlled by a player and the cash on hand.

Doug had some interesting comments in his writeup of the session:

... the game definitely has a rich-get-richer feel, and had I been on the poorer end of the scale in my last two games, I would probably have enjoyed the experience less, perhaps much less. As it was, I was happy to have our game end when it did, perhaps two or three turns sooner would have been even better even had it not been me.

I tend to agree with Doug in that I felt that for most of the game I was out of contention and just trying to play spoiler. The luck of the roll (when doing takeovers) or the draw (if some of your big routes, particular internationals) can certainly swing things quickly though, and there was tremendous tension towards the end of the game. Chuck was within 1 point of winning the game (out of 320 I believe) but couldn't quite pull it out; Doug pulled out a victory a turn or two later.

Not a great game but certainly a very good game, and one I would certainly play again.

Next up was Die Sieben Siegal, the innovative trick taking card game that I first played last year down in New Orleans. I had been eager to play this one again - it reminds me of spades, a game I played frequently growing up, though Die Sieben Siegel requires much better precision in bidding. The game was close, but I believe Mike came away with the victory edging out Dave.

Chuck had 90 minutes or so before he needed to leave, so we brought out Alhambra. This game confuses me. It feels like it plays on auto pilot and is mostly a luckfest (I'm sure there are strong players out there that win consistently, but it still feels that way to me) but I always enjoy the ride. 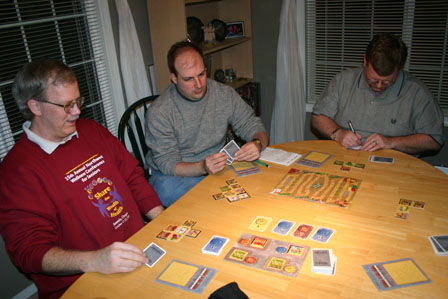 KC, Chuck, Ken, and I lay out our patio furniture in Alhambra. 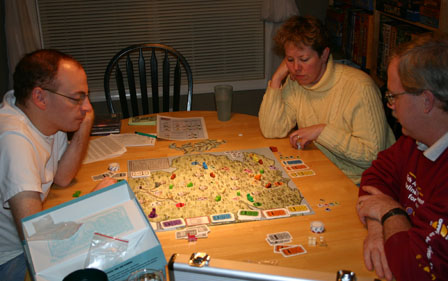 Dave, KC, and Rita played Stephenson's Rocket. I've never seen this game though I've read about it quite a bit.

Mike suggested Industria, and I wanted to give it another try after my first ho-hum encounter with it at Gamestorm this year. This is a thinking game, and I must give credit to the graphic designer - I think the game is a pleasure to look at. I think the game is lacking a plot line - there's no real phasing of the game, no climax. Each round feels about the same, you do your best, then you see what the score is at the end. It was a fun ride, but given the same amount of time I would rather play the much better Power Grid. 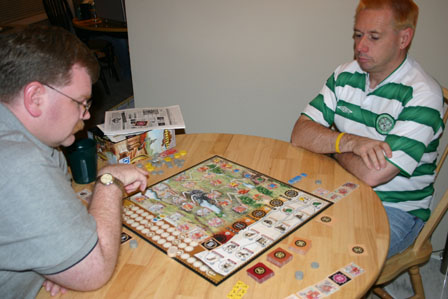 Ken, Mike, and I played Industria.

I focused on getting bonus points from linkages and didn't pursue any of the special tile marker bonuses. Turned out to be a decent strategy as I won the game. Somehow I ended up with a pile of money towards the end, allowing me to bribe Mike into selling me a tech tile that gave me two more linkages. I think I would have won the game anyway, but it was fun seeing him sell it for 7 while Ken's ears turned red.

Tonight I was facing an evening at home alone on my birthday (we'll celebrate tomorrow night out at Salishan), but a call mid-day from Ken made my day - the Rudes invited me over for dinner. Ken, Brandon, and I were planning on getting together for some gaming tonight anyway, but the added surprise of dinner and desert was a very kind gesture on their part. Ken is an OSU alumnus, so was as eager as I to watch the Insight Bowl while gaming - the Beavers handed Notre Dame another crushing bowl defeat, so all is good in the sports world for me right now. All I need is for Iowa to win on Saturday, the Colts to win the Superbowl, and the Pacers to rebound and win the NBA. I'll be happy with 2 out of 3.

Ken requested Entdecker, the exploration game designed by Klaus Teuber. I've had this game for a while but hadn't played yet. 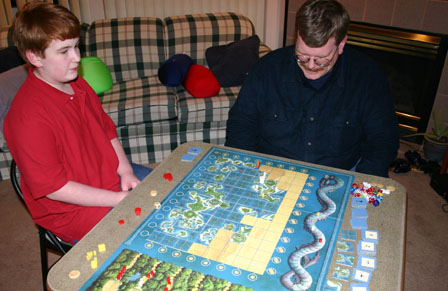 Brandon, Ken, and I explore the great unknown seas in Entdecker. This game has an awesome scoring track (the serpent on the top of the board).

This game has a lot of similarities to the Carcassonne series, though is quite a bit deeper (and longer). Unfortunately we played incorrectly: 2/3 of the way through the game, Ken mentioned that we forgot the toll-paying rule when you explore along a route that passes through a tile with a player marker on it. I doubt the outcome would have changed (Ken crushed us, and I finished last), but the money dynamic early in the game certainly would have been different.

I made the mistake of not get enough completed smaller islands early in the game, and I was very under-represented in the villager tracks competing for the end-game prizes. Ken had a very lucky draw at the end that took away a majority on a large bonus-tile island that gave him the runaway lead. Had a I won it the game would have been a bit closer, but Ken had the game in the bag. I definitely want to play this one again and will try and get it out this weekend.

I work my last day this week tomorrow then head out to Salishan to rejoin the family. The Rudes and the Humphreys will join us out there for an extended New Years celebration weekend. There will be a decent amount of gaming so I'll try and post as the weekend goes by.