I didn't see much of the kids this week due to work committments each night, so I was eager to sit down and spend some quality time tonight. We decided to play a game and I suggested something we hadn't yet tried as a family - Robo Rally. I purchased this game used from KC and first played it at Sun River earlier this year.

I'm a big fan of programming games - probably has something to do with my software development background. Simultaneous planning adds an interesting amount of chaos and randomness as well, which keeps things exciting. The game was easy to explain and other than one bit of rules confusion (do you refresh your entire hand each turn, or keep leftover cards? Turns out you refresh...), we got underway quickly. 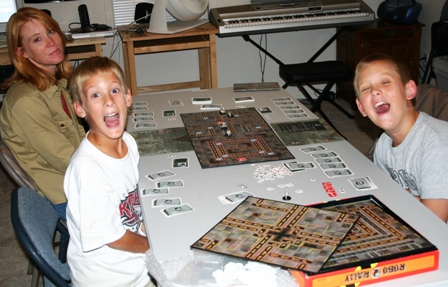 Everything was fine and dandy at the start of our Robo Rally game!

I could tell from the start that this would be a great experience for the family. The unpredictability of opponents' moves, the complexity of plotting, and learning the workings of the various board elements kept everyone guessing.

Julie and Jacob picked up the programming quickly, making a few small orientation mistakes early on but then adapting to plot things out more carefully in their minds. Matthew, on the other hand, couldn't quite grasp the notion of turning and orientation. He was always thinking in terms of absolute position, i.e., if the programming card says “Turn Right” then his robot will be turned to the right side of the board. Needless to say, this caused a great deal of confusion for him and led to a quick demise (three consecutive kills of his robot by running off the board). Tears ensued and we had some serious child gamer meltdown on our hands. He did cheer up quickly, but I don't think this is a great game for him yet. It will be a great way for him to learn programming though, or vice versa. Perhaps if I spend some time teaching him Logo, he'd be more prepared for this game.

I was able to pull out a victory at the end while Julie and Jacob powered down to clear out their wounds (and, in the case of Julie, 3 locked registers!). We played the intro scenario with two boards and two goals.