I'm back after one my longer absences from posting. If you aren't family or interested in our ski trip, you can probably skip this one! Back to gaming in a few.

Julie, Jacob, Matthew, and I flew down to Reno two weekends ago to join Julie's two brothers and sister for a short ski week at Tahoe. Two years ago we stayed in south Tahoe for a week and skied Heavenly, Squaw Valley, Alpine Meadows, Kirkwood, and Northstar. We enjoyed Northstar so much on that trip that we decided to stay there for the whole week this time. Northstar has a great mid-week package at their village that gives two daily lift tickets for each room occupied, so it was also very affordable. 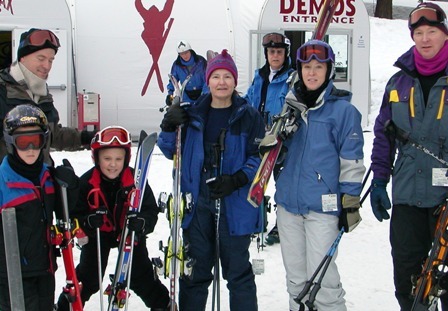 Conditions on day 1 were great. The snow wasn't very fresh, but the weather was fairly warm and the sky was clear. We hung together as a group for most of the morning. After lunch, Mike, Dave and I headed to the back side for some harder skiing. 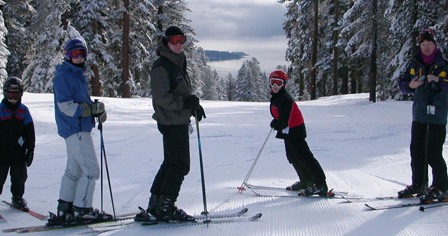 In the afternoon our (lack of) conditioning became very apparent. The back side is where Northstar shines. This is where the bulk of the black diamonds are; not as difficult as many ski mountains, but plenty long and diverse enough terrain to keep things interesting. Our favorite part of the back side are the groves of widely spaces trees. Plenty of ungroomed powder and it forces more consistent turning. 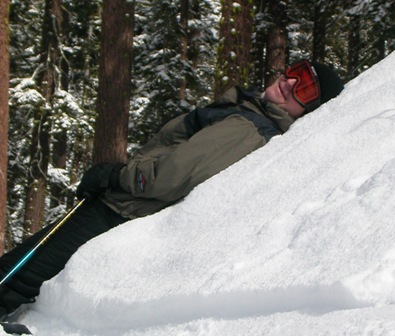 After three or four hard runs we were pretty tired though, so we headed back to the condo for some r&r. 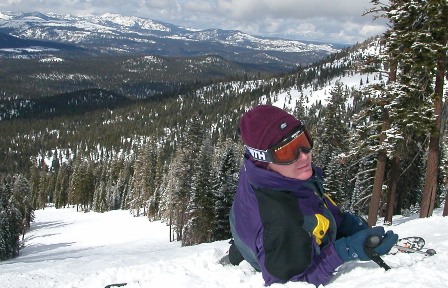 Much of the time back at the condo was spent reading, watching movies, and playing some lighter games. Dave brought Call of Duty for Mike to try, so he spent much of his time immersed in that great first-person WWII game. 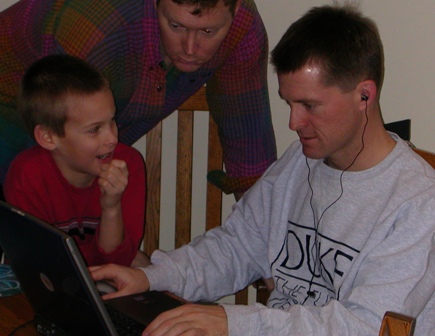 On Tuesday, Jacob, Matthew, Dave, and I decided to give snowboarding a try. For Dave and I it had been 10 years (our trip to Steamboat) since our last attempt. For Jacob and Matthew it was their first try. They are both very strong skiers for their age, able to ski easier black diamonds and very comfortable on just about any blue slope. 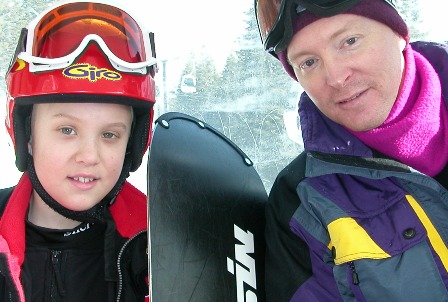 Jacob and Matthew joined a youth lesson while Dave and I took an adult beginner lesson. This turned out to be a mistake, since Dave and I picked up the basics very quickly and spent most of the class watching the instructor teach the other three how to slide and do basic edge turns. 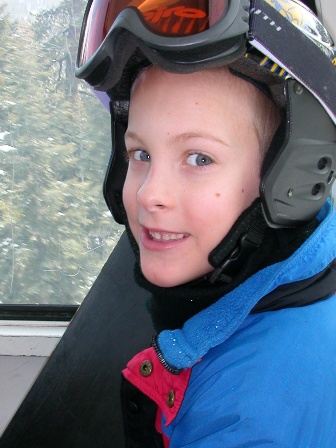 The lessons lasted until about 12:45, so we had some lunch then decided to take the boys on their first lift (a bunny slope). That went well so we got on the high speed quad to try a longer green run. This turned out to be a mistake. Matthew wasn't quite ready for such a long run, and he had some tough falls. He tends to be pretty aggressive and got going a bit too fast a few times and couldn't keep his balance. So after one run, Matthew was done so we took the gondola down and called it a day. 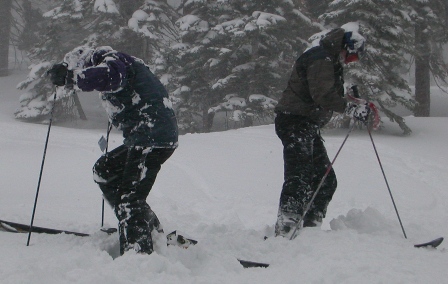 On Wednesday we started to get some serious snow. Winds were strong, visibility was low, and snow was falling hard. The mountain was about to get over four feet of snow over the next 36 hours. In general this is a good thing, but while the snow is falling it make things challenging, especially with the kids. Most of the group quit pretty early on Thursday, but Dave, Mike, and I spent some quality time on the back side in the new powder. We got worn out quickly so retired around 2pm. 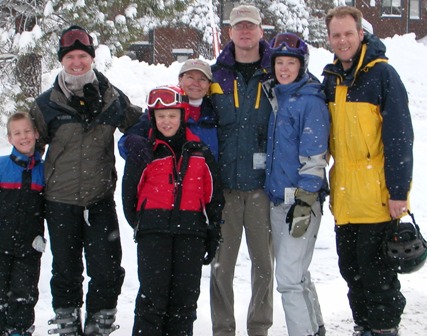 The snow was still falling hard on Thursday, and around 8:30am or so we headed to the bus stop to catch the shuttle. The power had gone out in our condo about 15 minutes earlier, but we didn't really give it a second thought. Turns out the power was down on the entire mountain, causing some transportation issues. First, the shuttle didn't show up for about 40 minutes. Second, the gondola was shut down indefinitely. Finally, the backup lift wouldn't start operating for another 45 minutes or so. Of course all of the mid-mountain lifts were running just fine. Makes perfect sense. Dave and Lisa had planned to take the day off anyway (with Matthew), and Jacob and Julie gave up after waiting for the gondola for a while. The weather was getting colder and windier. So it was down to just Mike and me. 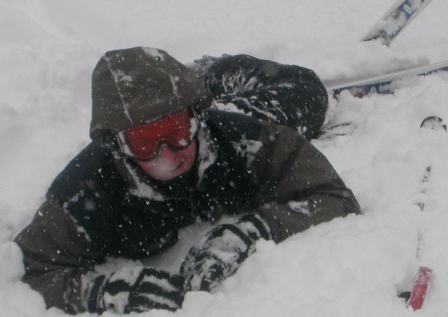 Visibility was low again, but the skiing was fantastic. The power issues prevented us from heading to the back side, but we had plenty of fun skiing the deep powder off the Vista lift. I'm not a seasoned powder skier, and I don't have powder skis, but it was an adventure and I was able to work on my technique. Fortunately I didn't lose any skis in the process.

Overall it was a great trip. We managed to work in four plays of Bang! with the High Noon expansion, a few plays of Attribute, one game of Too Many Cooks, and a fun round of Electronic Catch Phrase.