Jacob and I traveled across town to the Rude household for some Sunday
afternoon gaming yesterday. Matthew had a birthday party to attend, so it was
a good chance to play some heavier four-player games.

I've written about New Eden before - this is the prototype developed by KC
Humphrey. I'm going to be demonstrating the game for some folks later this
week, so I wanted to brush up on my knowledge of the rules and practice
teaching it to a group. Ken, Brandon, and Jacob had not played yet, so this
was a perfect opportunity. I have described the mechanics of the game before, so I won't repeat any of those details here. 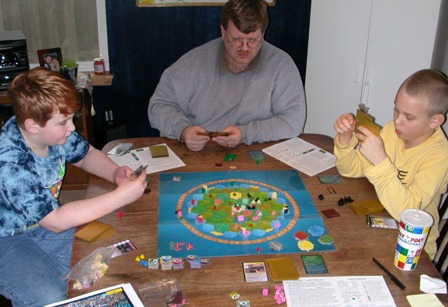 We had limited time for this game, so we only played one season (a normal game
has two seasons, with a scoring round after each). I found that I had
remembered the rules well and didn't have to reference the rulebook very
frequently. We used the small board configuration for four players, and
started with half the fuel supply (21, though after talking with KC it should
have been only 20).

The group enjoyed the game very much. The end of the game found everyone
thinking about strategies, how to take advantage of certain card combinations,
etc. which is a very good sign. I mostly avoided conflict and got three
uncontested farms near a lake, but Brandon turned out to be the smarter player
and finished with three more points than I, taking first place. 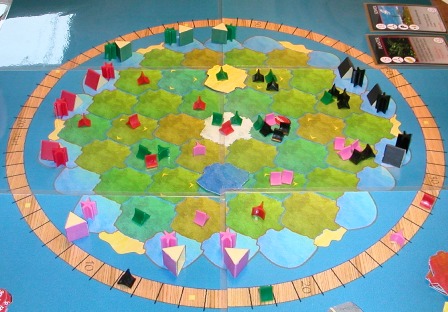 Ken was eager to bring out Amun Re, as was I, so that was our next choice.
Every time I play this game I enjoy it more. Unfortunately, this time I had a
similar result as the last time I played this game - very strong
start in the old age, poor finish in the new age. 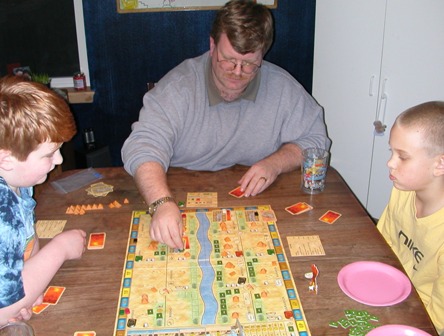 I exhausted my funds at the end of the old age via sacrifice, trying to
maximize the scoring of my two temples. I also drew no bonus power cards in
the new age (I was able to score two of them in the old age, so I guess it
evened out). 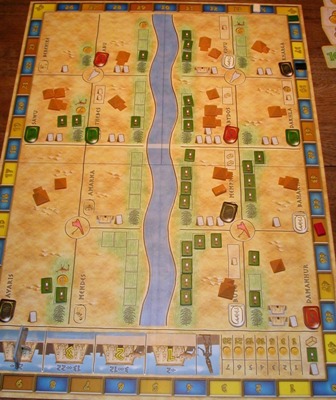 Final positions in Amun Re. Brandon finished seven points ahead of the closest
finisher (me), mostly by virtue of his temples that score their maximum
potential.

Brandon played a very strong game again, quietly gaining two temples, one
bonus power card, and a temple majority on one side of the Nile. He finished
far out in front, beating me out by seven points.

There wasn't much time left, but I was eager to teach the group how to play El
Grande and at least get in a few rounds before taking Jacob home. I really
love this game (I've only played it 1.5 times though). Very easy to teach and
learn, beautiful components (perhaps the nicest I've ever seen in a board
game), but challenging to play well. 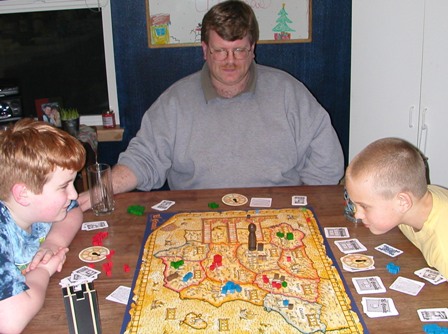 We only played through the first scoring round, but Brandon completed his
trifecta, showing up the adults one more time with a victory. His victory was
sealed when Jacob, Ken, and I all chose the same province for our Castille
caballeros!