Jacob and I cruised over to Kevin's last weekend for some Sunday gaming.
Normally a long haul for us, it was very convenient this time because Jacob
and I were able to get in some Christmas shopping for Julie and Matthew at the
nearby shopping malls. Jacob spent his own money on his gift for Matthew and
was a great helper while we found a few items for Julie.

Kevin always has such a friendly crowd at
his place, and the group is usually a good, manageable size (6-9 people). Onto
the games...

As the 'geek likes to say, this is a "card game that's masquerading as a board
game" - a fun opener that almost always seems to end too quickly for me. I'm
sure this is partly because each game has been played with 1 or 2 first
timers. Players play cards to participate in an auction for provinces with a
goal of owning three contiguous. Most of the cards have face values, while a
some can be played to double a player's bid, force each of the facecards to be
worth only 1, or force an auction to end early. Jacob set up the winning play
this game by contesting a province adjacent to his that would give Kevin
enough contiguous provinces to win the game. 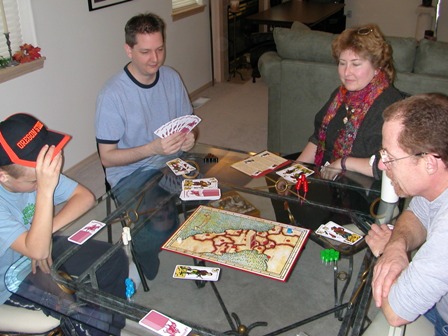 Unfortunately not enough strength stayed in the hand, and I wound up 1 or 2
points short of Kevin's total (he had few but sufficient cards) and he won the
game.

This game will soon hold the record for game I've seen played the most without
ever playing it. This looks fun - the bits are so cool and I haven't played
many building games like this. 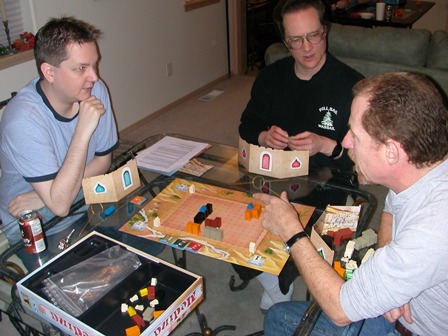 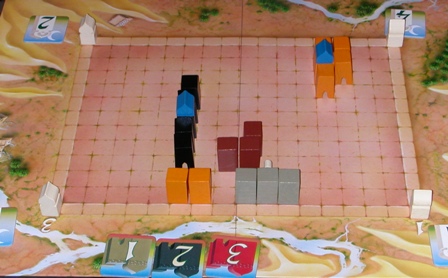 Ahhh, Domaine... this one I've been wanting to try for some time. Jacob and I
saw a large format version of this at GenCon last
summer, and since that time it has been on our short list of games to try. So
when the opportunity to play it came up, Jacob and I snatched the box and
Sabrina joined us.

Domaine is a very spatial game (you can read an online tutorial). There is a random layout in each
game with the 9 land tiles (a fixed center), and players alternate placing
each of their four castles on the board with an adjacent knight. There are
some special squares on the board - some help produce victory points (villages
and forests), others produce income (mines), and then there are the meadows
which are essentially empty space. The goal of the game is to segment off
chunks of the game board with borders, creating domains around your castles. 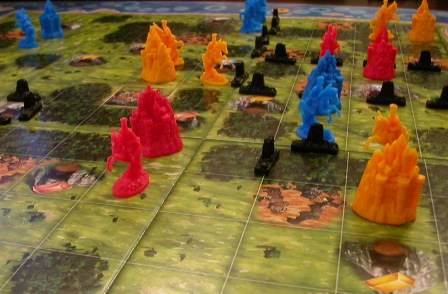 If you try and get too greedy and build a huge domain, it will either take too
long or your opponent will just disrupt your plans. Economy enters the game as
players must pay gold to perform actions, which include training knights,
building borders, or expanding an existing domain into an opponent's. The card
deck composition is creative - cards are labeled A, B, C, and D, and all of
the "A" cards are shuffled together, then the B's, etc. The A's are placed on
top of the B's, B's on the C's, and the C's on the D's. This creates a
changing economic environment in the game. For example, action cards to build
borders are more common early in the game and often cost less than later in
the game. The easiest way of getting money is selling your action cards - they
have a sale price as well as an action cost (the selling price is always less
than the cost). Cards that you sell back to the bank go face up in a pool of
cards that your opponents can then purchase back.

We made a few serious rules blunders during play (I was teaching Sabrina and
Jacob how to play while I taught myself), the most serious being how knights
are handled. Nobody was building knights early on because we missed the rule
that said you can only expand into someone else's domain if you have more
knights in the expanding domain than in the opponent's. This is obviously a
critical reason to recruit knights, and without this understanding it doesn't
make much sense to ever hire a new one. We pointed out to Kevin how worthless
the knights seemed, and he quickly corrected us. This came just as the domains
were getting completed, so there ensued a rush to build knights. We also
missed the rule that you can't steal a knight adjacent to a castle (hence the
configuration you'll see below in the end game).

I held a fairly healthy lead for a while, but Jacob and Sabrina came on strong
as they began to complete their domains. I pulled out the victory by expanding
a domain and grabbing a resource monopoly at the end which pushed me slightly
ahead in victory points (I was orange, Jacob blue, and Sabrina red). This game
is on my short to-buy list - after the holidays though (hey, it's Christmas -
we shouldn't be buying stuff for ourselves!). 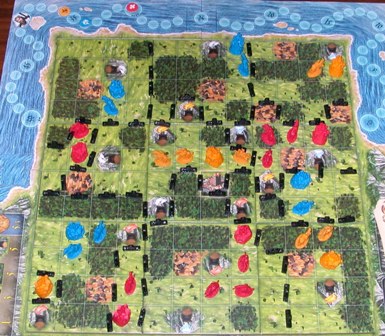 Kevin, Jim, Jeff, and Sabrina then played a game of Clans. This is most
definitely not on my to-buy list. This is an abstract game with a fairly
weak theme, and my one playing with Angela wasn't very enjoyable. Maybe I
should give it another try... but really, why, when there are some many games
I like out there? 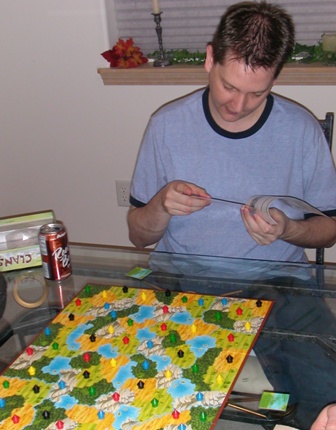 A new guest arrived that I hadn't met before - welcome Greg! Greg is an
experienced gamer but hadn't tried Aladdin's Dragons yet, so I offered to
teach it to Greg and Jacob. I enjoy this game and will rarely turn down an
opportunity to play it. This game is an auction game with a few magical twists
(artifacts and spell cards that can be used to disrupt auctions or alter the
game mechanics). Each player has a series of tokens numbered from 1 to 9
(minus the 3), and players take turns bidding face down with the tokens on a
number of spaces (caverns where you can get gems, the town where you can get
cards and other advantages, and the palace where you can get artifacts). The
player with the most artifacts wins the game. The basic strategy is to acquire
gems early on so that you can by artifacts as the game progresses. This game
is always pretty close when I play it, and this was no exception. I managed to
pull out the victory with one more tile than Greg, and two more than Jacob. 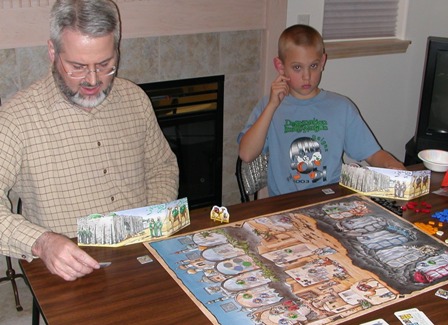 Well, that was it for this session (for Jacob and I anyway - it was getting
late and Jacob had school on Monday). Stand by for another session report - we
had a game day it our house yesterday with a huge turnout and a number of
interesting games played.